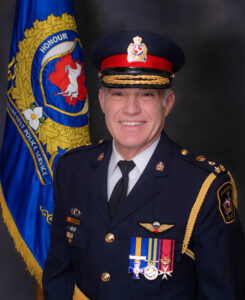 Gary Conn was born and raised in London, Ontario where he graduated from the University of Western Ontario with an Honours Bachelor of Arts Degree in Sociology.  He subsequently enrolled in the Canadian Armed Forces and was a Commissioned Officer with the Royal Canadian Dragoons.  In 1995, the London Police Service hired Gary and in 1998; he joined the newly-amalgamated Chatham-Kent Police Service.

In 2002, he was seconded to the Ontario Police College where he facilitated in the Basic Constable Training (BCT) program.  He facilitated a number of the practical courses, including Firearms, Defensive Tactics, Police Vehicle Operations and Physical Training.  Over the course of his career, Gary has worked in Community Patrol, Traffic, Training, Recruiting, Public Information, Honour Guard, Courts, Search and Rescue, Critical Incident Commander and Professional Standards.  Later as the Deputy Chief, Gary oversaw all three Branches of the Chatham-Kent Police Service, including Community Patrol Branch, Operations and Administrative Support.

An advocate for life-long learning, Gary has continued his education at Western University, where he completed his Master’s Degree in Public Administration and his Doctor of Education.  Gary is a graduate of the Rotman School of Business – University of Toronto where he completed the Police Leadership Program.  He is also a distinguished graduate from the FBI National Academy, Session 258 where he further obtained a Graduate Diploma from the University of Virginia in Criminal Justice Education.  He has completed numerous courses in police operations, management and leadership through the Ontario Police College.

Gary is a Board Director for the Chatham-Kent Women’s Centre and the Chatham-Kent Gay Pride Association.  He sits on the CACP (Canadian Association of Chiefs of Police) Use of Force Advisory Committee, is a Co-Chair for the OACP Justice Committee, a Co-Chair for the Chatham-Kent Community Safety and Well-Being Steering Committee and is currently the immediate past President for the OACP (Ontario Association of Chiefs of Police) He is a Knight of the Hospitaller Order of St. John, Company Sergeant Major for Delta Company of the Essex and Kent Scottish Regiment and has been appointed Member of the Order of Merit of the Police Forces.  Gary has been married to Anne-Marie for 28 years and they have three boys.  He enjoys running, skiing, swimming and scuba diving. 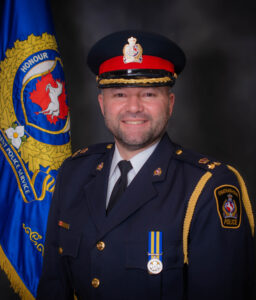 Kirk Earley was born and raised in Chatham, Ontario. In 1997, Kirk joined the Chatham Police Service as a special constable. Kirk then spent time as a constable in our front-line Community Patrol Branch, Training Unit as a Use of Force Instructor, Community Priority Action Team concentrating on community issues in the Wallaceburg area, Intelligence Section and in the Criminal Investigations Branch.

In 2009 Kirk was promoted to the rank of Sergeant and took command of the Investigative Support Unit. Which is responsible for, forensic identification unit, crime stoppers, and crimes against vulnerable persons sections. Kirk also supervised the Intelligence Section, which is responsible for drugs, property crimes, asset forfeiture, and covert operations.

In 2014 Kirk was promoted to the rank of Staff Sergeant and was transferred to the Community Patrol Branch to oversee the day-to-day operations of a front-line Community Patrol Platoon. Kirk also managed the Corporate Services Division, where he was responsible for the day-to-day operations of the Emergency Communications Centre, Court Services Divisions and Records Section.

In 2017, Kirk was promoted to the rank of Inspector and assigned to oversee the Administrative Support Branch. This division is responsible for property management, fleet, information technology, infrastructure management and corporate services.

In 2020, Kirk was appointed as the Deputy Chief of Police, overseeing policing operations of the Chatham-Kent Police Service.

Over his career, Kirk has received several Police Service Board, Chief and Deputy Chief Commendations related to his leadership and work ethic in Community Involvement, Program Development and Major Case Criminal Investigations.

Kirk is an active member of the community as a volunteer with a variety of organizations, boards and sports teams. Kirk possesses a strong work ethic and has proven himself to be an effective and reliable leader within the organization. 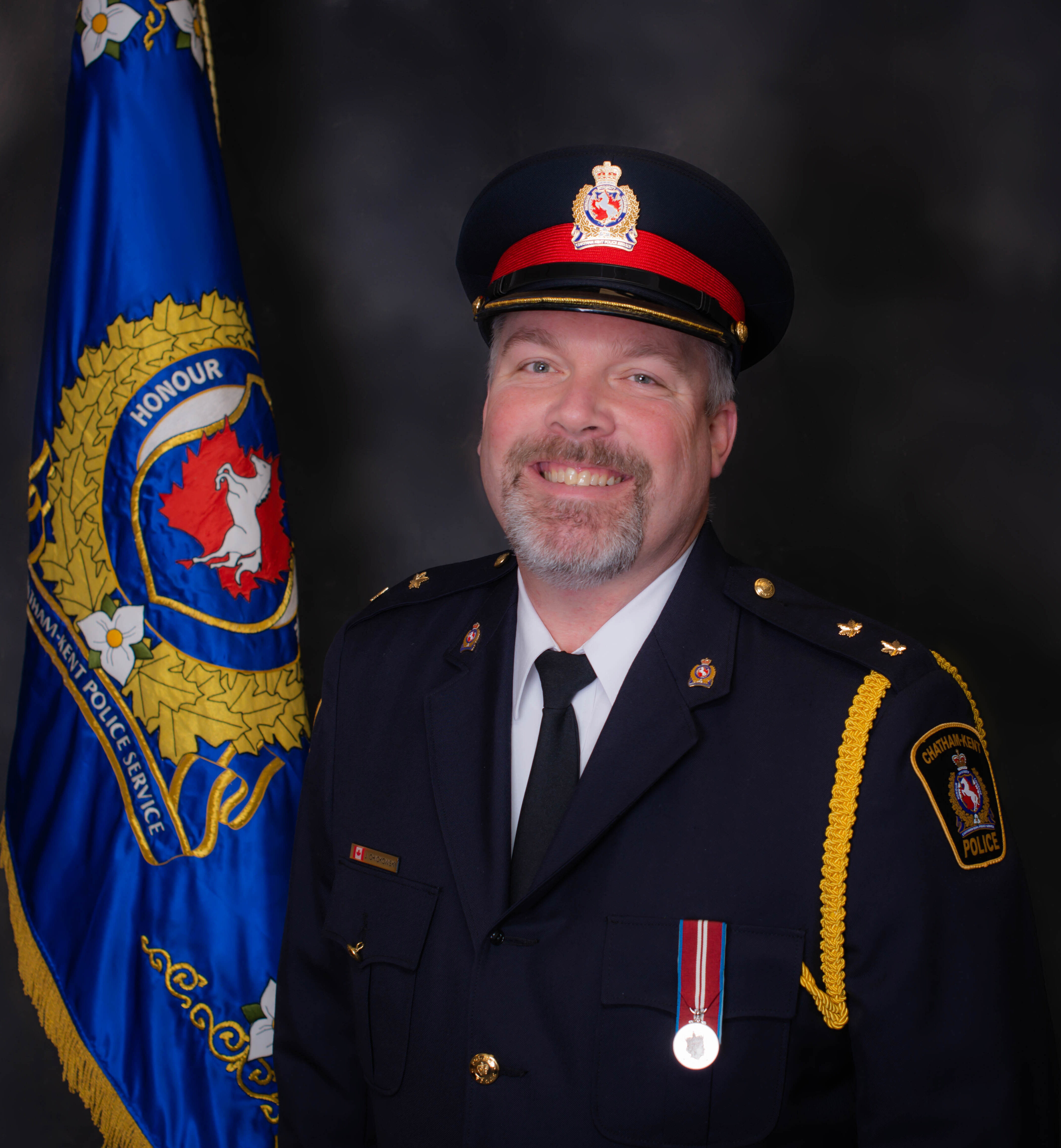 Jason Chickowski was born and raised in Chatham, Ontario.  In 2001, Jason joined the Chatham-Kent Police Service where spent the beginning part of his career as a constable in our front line community patrol branch.  In 2004, Jason was selected to be a coach officer.

In 2007, Jason was chosen to be a member of the Child Abuse Investigation Team, working in partnership with the Chatham-Kent Children’s Services.  In 2009, Jason was transferred to the Criminal Investigations Branch during which time Jason was involved with many major crime investigations including but not limited to; homicide investigations, major sexual assaults, robberies, arson, major fraud and Internet Child Exploitation investigations.

In 2012, Jason was promoted to the rank of Sergeant and was successful in taking over command of Court Services Section.

In 2014, Jason took command of the Records Management Section, where he was jointly responsible for the implementation of the electronic crown brief system currently used by the Province as well as a Lean Six Sigma Analysis of the Unit.

In 2015, Jason returned to community patrol and spent the next five years as a front line supervisor.

In 2020, Jason was promoted to the rank of Staff Sergeant where he was assigned as the Manager of Corporate Services, where he was responsible for the day to day operations of the Emergency Communications Centre, Court Services Divisions, Records Management Section and Special projects.

In 2021, Jason was promoted to the rank of Inspector where he was assigned command of the Administrative Support Branch.

Jason has been responsible for the implementation and completion of several service wide projects and has been the recipient of several Police Service Board, Chief and Deputy Chief Commendations related to his leadership surrounding project implementation, program development and his performance dealing with major case investigations.

Jason graduated from Lee University in Cleveland, Tennessee with an Honours Degree in Computer Information Systems and also completed his Master of Arts Degree in Leadership from the University of Guelph. Jason has also completed both the Professional Certificate and Advanced Certificate in Leadership from the University of Western Ontario and is a Certified Municipal Manager III, with a Police Professional distinction.  In addition, Jason has attended a number of police related management and investigative courses and he is a certified critical incident commander and major case manager.

Jason is currently an active member of his community as President of Chatham Minor Baseball and on the Executive Board of Family Services Kent.  In 2012, Jason was the recipient of the Queen Elizabeth II Diamond Jubilee Medal for his many hours working with the youth of the community. 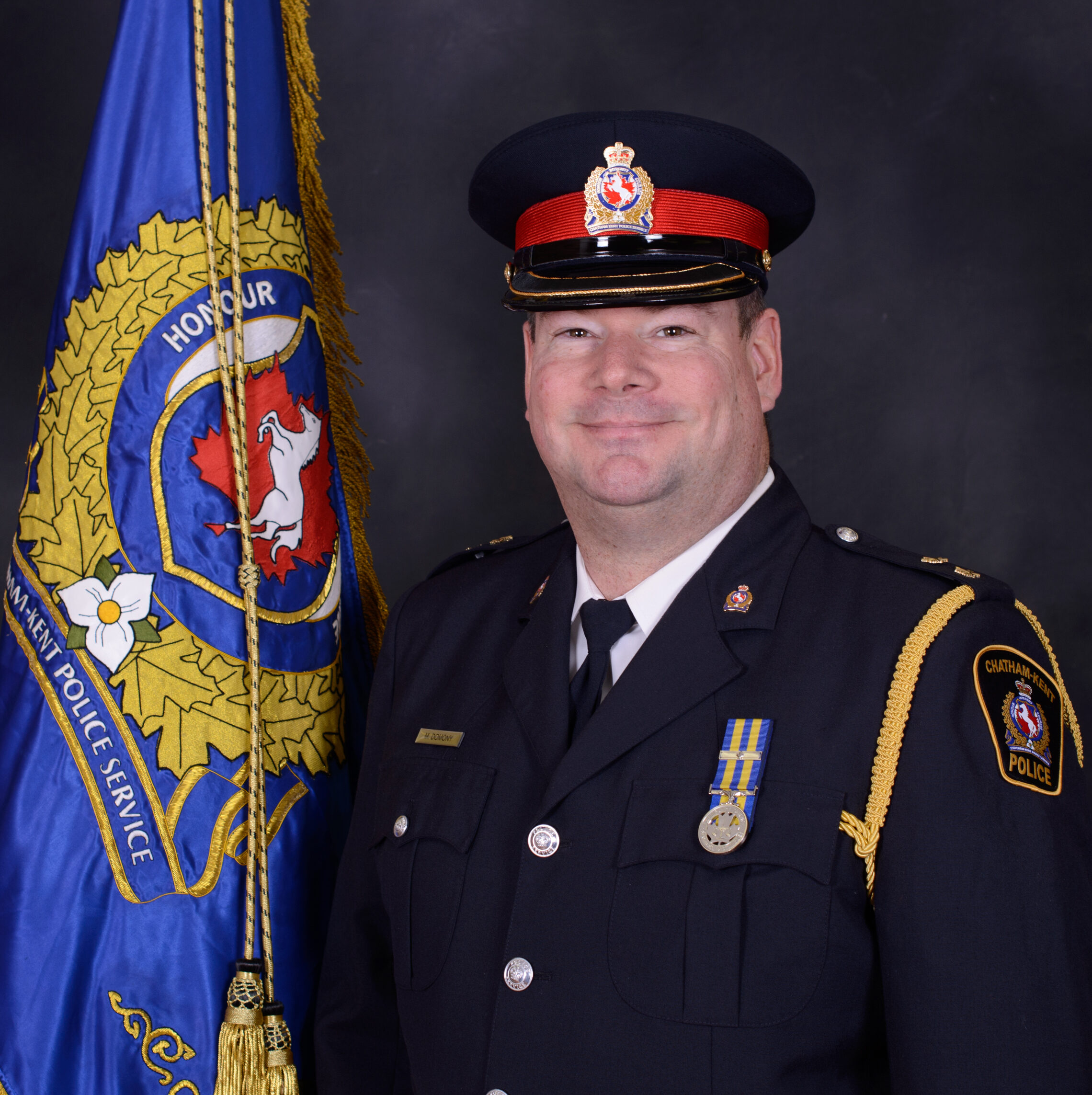 Inspector Mike Domony started his police career with the Metropolitan Toronto Police Service in July 1989 as a cadet. During these early years, he was assigned to the Summons Bureau and then to the Central Traffic unit where he conducted parking enforcement. A year later, in July 1990, Mike was promoted to Constable where his duties in the Traffic Unit primarily consisted of highway patrol and traffic collision investigation.  It was during this time, that he was qualified as a level 4 collision reconstructionist.

In August of 1998, Mike joined the newly amalgamated Chatham-Kent Police Service. He was initially assigned to “A” platoon and worked out of the Thamesville substation. A year later, in 1999, Mike was re-assigned to platoon Traffic duties, working out of the Tilbury substation. From April 2000 until June 2002 he was assigned to our new Traffic Unit, working out of the current office located on the Dillion Road. In December 2003 until December 2005 Mike had the rare and privileged opportunity to be seconded to the Ontario Police College where he instructed new recruits from around the province in Defensive Tactics and Police Vehicle Operation (PVO).

During his tenure at the Ontario Police College, Mike was promoted to the rank of Sergeant in 2005. In 2006, Mike was assigned to “A” platoon as a Road Supervisor. As a Sergeant, Mike oversaw some of our speciality units; this included the Training and Professional Development Unit and the Patrol Support Section, which incorporates a multitude of sections including Traffic, Marine, K-9 and our Auxiliary Police.

Finally, as a Staff Sergeant since 2015, Mike has been a Platoon Commander and oversaw our Professional Standards Unit. Mike has always been a “go to person” who exemplifies professionalism on and off duty. He is always approachable, is committed to improvement through life-long learning having returned to school at Western and obtaining his Diploma in Public Administration. Mike is currently enrolled in the Master of Public Safety at Wilfrid Laurier University. He is also a graduate of the FBI Leeda Academy and the Police Leadership Program through the Rotman School of Business at the University of Toronto. 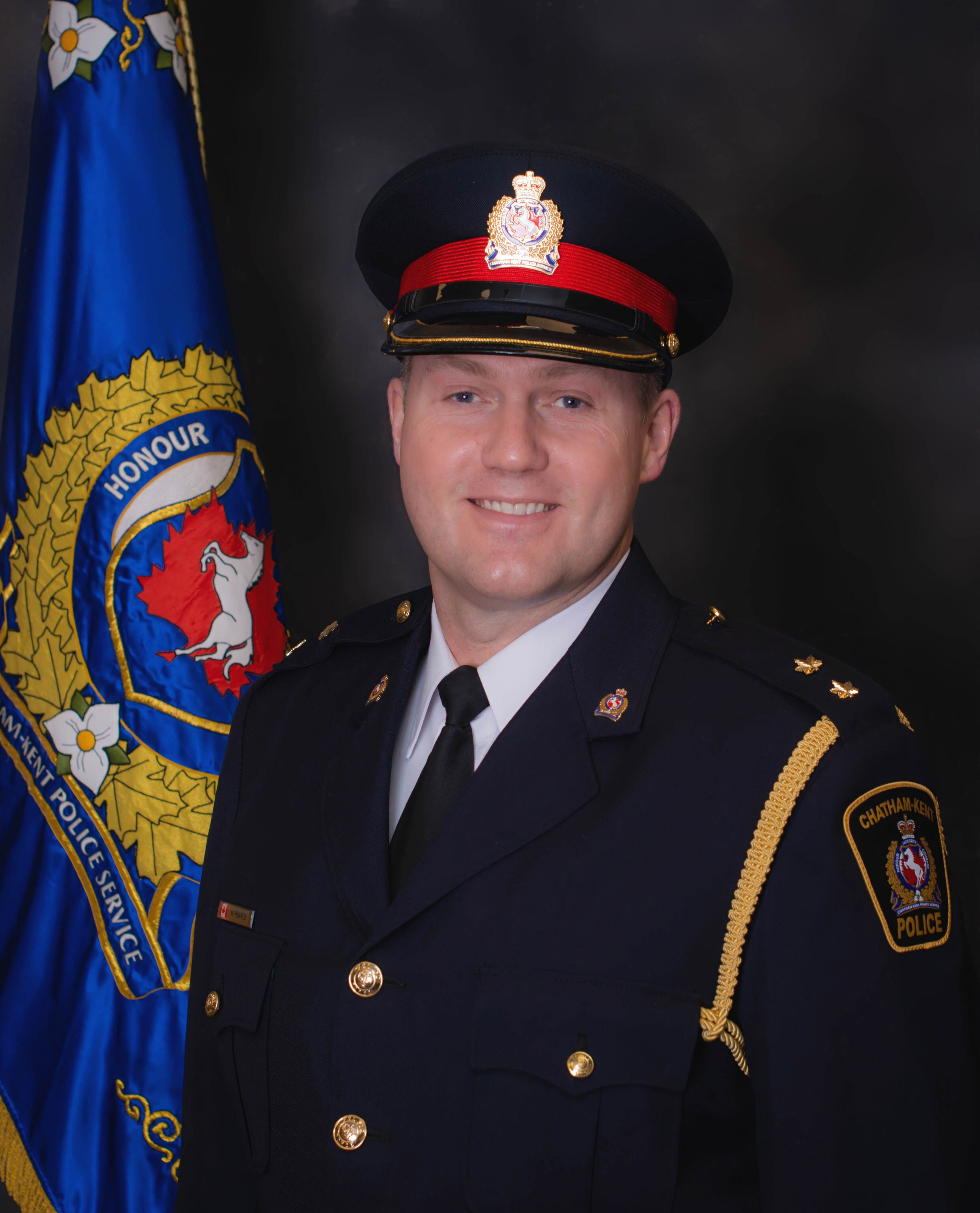 Michael was born and raised in Richmond Hill, Ontario. He started his policing career in 2002 with the York Regional Police, working in Patrol, Community Oriented Response, and Drugs and Vice. During that time, he volunteered with Big Brothers Big Sisters of York Region for 5 years.

In 2007, he joined the Chatham-Kent Police Service, starting in Community Patrol. In 2009, he became the service’s first Public Information Officer and was a pioneer in the use of social media for law enforcement. He was the creator of the CKPS Cop Camp for Kids (now called Camp Sirens), and was a member of the Public Affairs and Communication Team at the G20 Summit in Toronto in 2010. In 2012, he joined the Traffic Unit, promoting road safety through enforcement and investigating serious and fatal motor vehicle collisions. He also sat on the Board of Directors for MADD Chatham-Kent for 6 years.

In 2016, he was promoted to the rank of Sergeant and supervised a platoon for three years before transferring into the Professional Standards Branch to investigate public complaints and assist with recruitment.

In 2020, he was promoted to the rank of Staff Sergeant and became the manager of Professional Standards, Training and Development, Recruiting, and Media Relations.

In 2021, he was promoted to the rank of Inspector and assumed command of the Community Patrol Branch.

Michael is a police fitness appraiser, incident commander, and major case manager. He is a board member with Chatham-Kent Victim Services and the Chatham-Kent Crush Girls Hockey Association, where he also coaches. He is a member of the Chatham-Kent drug strategy steering committee and is the Chair of the CKPS wellness committee. He also volunteers with the Law Enforcement Torch Run for Special Olympics.