The Chatham-Kent Police Service responded to 180 calls for service in the last 24 hours. Four people were arrested.

Woman Charged with Assault CK20047418
Yesterday morning, police responded to a domestic disturbance at a residence in Chatham.

Through investigation, police learned that a verbal argument between the man and woman escalated into a physical altercation, resulting in the woman assaulting the man.

The 24-year-old woman of no fixed address was arrested and charged with two counts of assault. She was released pending a future court date of November 3, 2020.

Disturbance leads to Weapon Related Charges CK20047537
Last night, police responded to a disturbance between youths, all known to each other, in Chatham.

Through investigation, police learned that while the teens were playing outside, one of them became upset and pointed an air soft gun at two of the other kids.

The 14-year-old Chatham youth was arrested and charged with being in possession of a weapon for a dangerous purpose and two counts of pointing a firearm. He was released pending a future court date of November 23, 2020.

Executed Warrants
CK20047498 – Yesterday afternoon, police located a man in Chatham who was wanted for attempting to pass three stolen cheques at a local convenience store. Marco Bahro, 33 years, of Grand Avenue East in Chatham was arrested and charged with being in possession of property obtained by a crime under $5000, uttering a forged document and fraud under $5000. He was released pending a future court date of November 3, 2020.

CK20047523 – Last night, police located a man in Chatham who was wanted for failing to comply with his Probation Order. Eric Belland, 31 years, of Bloomfield Road in Chatham was arrested and released pending a future court date of November 16, 2020.

Motor Vehicle Collision in Wallaceburg CK20047447
Yesterday morning, police responded to a two vehicle collision at the intersection of Murray Street and Reaume Avenue in Wallaceburg. No one was injured. Total damage was estimated at $30,000.

A 52-year-old Wallaceburg man was charged with making a left turn while failing to afford reasonable opportunity to avoid a collision.

WE Are YOU
Police officers and civilian personnel work hard every day to earn the public’s trust and confidence. Without this, we cannot serve our community effectively.

This week, we highlight Erica McIntosh, a member of our Records Management Unit. To read her story, please see https://ckpolice.com/we-are-you/

Give Buses a Brake
Last week, with the re-opening of schools, the Chatham-Kent Police Service Traffic Management Unit conducted the ‘Give Buses a Brake’ safety initiative. Officers patrolled numerous bus routes throughout the Municipality and school bus pick-up and drop-off zones were monitored. In addition, speed enforcement was conducted in various community safety zones near schools. Crosswalks were also targeted for enforcement initiatives. The goal was to ensure the safe return of students to school after an extended summer break as well as reminding motorists to use caution near schools and when encountering school buses.

In total, 60 tickets were issued during the five-day project. Most drivers were charged with speeding through Community Safety Zones. One motorist was charged with passing a stopped school bus with its flashing lights activated.

The Traffic Management Unit would like to thank the many bus drivers, bus-coordinators and school officials who worked in collaboration with our Police Service to make the first few days of school successful for students across Chatham-Kent. Stay Safe and ‘Give Buses a Brake’. 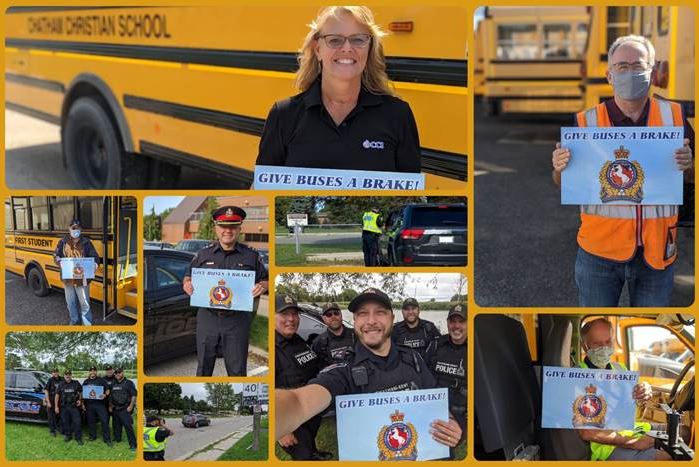