The Chatham-Kent Police Service responded to 184 calls for service in the last 24 hours. Five people were arrested.

Police Execute Drug Warrants
CK20003606 – Yesterday morning, members of the Chatham-Kent Police Intelligence Unit with the assistance of the Critical Incident Response Team, executed a Controlled Drugs and Substances Act warrant at a residence in Chatham. Clayton Morgan, 43 years, of Harvey Street in Chatham was arrested and charged with being in possession of methamphetamine. He was released pending a future court date of February 13, 2020.

CK20003669 – Yesterday afternoon, officers executed a second Controlled Drugs and Substances Act warrant at a residence on Elizabeth Street in Chatham. Approximately $10,000 worth of crack cocaine, fentanyl, methamphetamine and oxycodone was seized. A set of brass knuckles, along with a set of brass knuckles and knife combo were also seized. A 32-year-old Chatham man, was charged with four counts of possession for the purposes of trafficking, two counts of being in possession of a prohibited weapon, four counts of breaching his Prohibition Order and two counts of failing to comply with his release conditions. He has been held in custody pending a bail hearing. 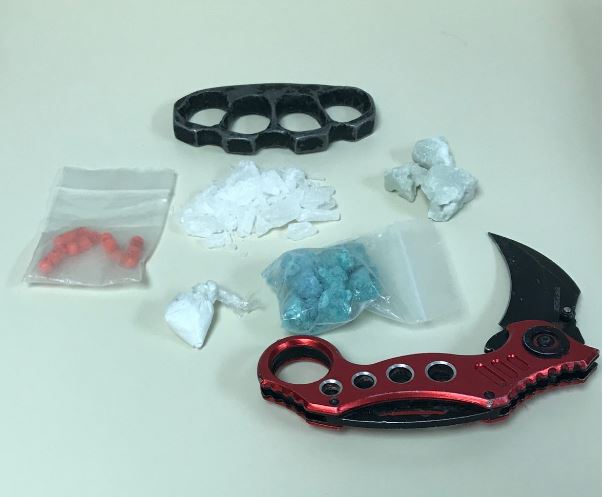 Man Charged with Escape Custody CK20003662
Yesterday afternoon, an officer on general patrol located a man on James Street in Chatham who was wanted for obstruct police, mischief under $5000, failing to attend court and for his fingerprints. As the officer placed the man under arrest, he pulled away and a struggle ensued. The man was able to quickly remove his shirt and jacket, breaking free from the officer. Following a short foot chase, the man was taken into custody in the area of Barth Street and Victoria Avenue.

The 31-year-old man of no fixed address has been charged with resist arrest and escape lawful custody. He has been held in custody pending a bail hearing.

The 48-year-old Chatham man was arrested and transported to the Courthouse pending a bail hearing.

CK20003614 – Just before 11:00 a.m. yesterday morning, emergency crews responded to a single motor vehicle collision on West Bothwell Road. The driver was travelling northbound when he lost control of his vehicle, left the roadway and struck a tree. The 51-year-old Thamesville man was airlifted to London for medical attention of non-life-threatening injuries. Anyone with information is asked to contact Constable Josh Flikweert at joshuaf@chatham-kent.ca or 519-355-1092.

CK20003652 – Just before 3:00 p.m. yesterday afternoon, police responded to a two vehicle collision on Dufferin Avenue between Hwy 40 and Mirwin Road in Wallaceburg. No one was injured. Total damage was estimated at $2500. The driver at fault was charged with careless driving.

CK20003664 – Yesterday afternoon, around 3:30 p.m. emergency crews responded to a collision involving a pedestrian on Sandys Street between Sudbury Drive and Oxley Drive in Chatham. The pedestrian, a 26-year-old Chatham man was transported to hospital as a precaution. He has been charged with failing to use a crosswalk.