The Chatham-Kent Police Service responded to 167 calls for service in the last 24 hours. Four people were arrested.

Officers observed the man exit his residence and drive to a local motel. Officers approached the man in the parking lot and he was taken into custody.

A search incident to arrest revealed that the man was in possession of three cellular phones and large amount of cash.

Total street value of the seized drugs has been estimated at $76,600. 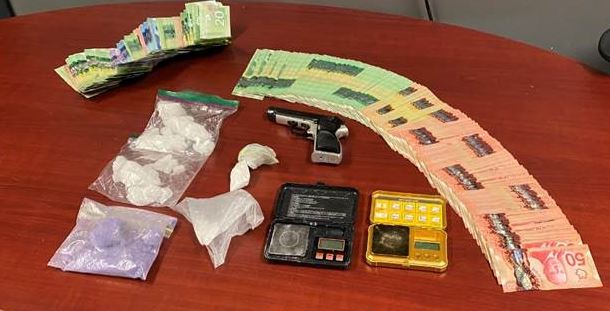 Man Charged with Mischief CK20055681
Yesterday morning, police responded to a family dispute at a residence in Morpeth.

Through investigation, police learned that a man in the home was damaging property.

The 30-year-old man was arrested and charged with mischief under $5000. He was released pending a future court date of November 27, 2020.

Woman Charged with Impaired Driving CK20055765
Around 7:00 p.m. last night, police responded to the report of a suspicious vehicle on St. George Street in Chatham.

Officers located a disorientated woman sitting in the driver’s seat of a vehicle, which was still running and in drive. Officers gained entry into the vehicle through an open window and put the vehicle in park.

Katherine Gibbs, 25 years, of Blackthorn Crescent in Corunna was charged with impaired driving. She was released pending a future court date of November 13, 2020.

Woman Charged with Breaching Curfew CK20055818
Shortly after 3:00 a.m. this morning, police located a woman in Wallaceburg who was wanted for break and enter and failing to attend court.

Through investigation, police learned that the woman was currently bound by a daily curfew.

The 24-year-old Walpole Island woman was arrested on the outstanding warrants and further charged with failing to comply with her release conditions. She has been held in custody pending a bail hearing.

Stolen Truck Recovered in Thamesville CK20055825
Shortly after 5:00 a.m. this morning, police recovered a stolen red 2013 Dodge Ram truck on Jane Road. The truck was unoccupied and towed from the scene. Through investigation, police learned that the truck was reported stolen from Middlesex County.

#LittleHeroes Halloween Costume Contest
In the spirit of Halloween, our costume contest is back. Send us photos of your kids dressed up in their best police costume for a chance to win a spooktacular prize.