The Chatham-Kent Police Service responded to 253 calls for service in the last 24 hours. Five people were arrested.

Man Charged with Domestic & Drug Related Offences CK20007486
On Sunday morning, the man attended the home of his ex-girlfriend in Wallaceburg. When the man was not allowed entry, he forced his way into the apartment. An argument ensued and the man left. The man returned later that night, but again fled prior to police arrival.

Yesterday morning, the man returned to the woman’s home and he was arrested. Upon being searched incident to arrest, the man was found to be in possession of suspected methamphetamine and oxycocet.

The 54-year-old Dresden man has been charged with unlawfully in a dwelling house, criminal harassment, two counts of drug possession and four counts of failing to comply with his Probation Order. He was transported to the Courthouse pending bail hearing.

Woman Charged with Drug Possession CK20007590
On January 18, 2020 the woman was released from Court with several conditions. One of those conditions stated that she was not to possess or consume any unlawful substance as described in the Controlled Drugs and Substances Act.

Yesterday afternoon, police responded to a business on Dufferin Avenue in Wallaceburg in regards to a woman observed injecting herself with a syringe.

The 34-year-old Walpole Island woman has been charged with failing to comply with her release conditions and drug possession. She has been held in custody pending a bail hearing.

Man Charged with Failing to Comply CK20007597
Last night, shortly after 6:00 p.m. police responded to the report of a man walking in the middle of Dufferin Avenue in Wallaceburg.

Officers located the man on the road. Through investigation, police learned that he was no longer living at the last known address on file and that he had not notified police as per her release conditions of his new address.

Michael Danuk, 36 years, of Adelaide Street in Chatham was arrested and charged with failing to comply with his release conditions. He was released pending a future court date of February 26, 2020.

Man Arrested on Outstanding Warrant CK20007614
On December 10, 2019 the man was released from Court with several conditions. One of those conditions stated that the man was to attend the Wallaceburg police station every Monday between 8:00 a.m. and 4:00 p.m. to sign in.

Last night, Lambton OPP located the man and he was arrested. The 32-year-old Walpole Island man was transported back to Chatham-Kent for court purposes. He has been charged with two counts of failing to comply and has been held in custody pending a bail hearing.

Break and Enters in Chatham
CK20007463 – Sometime over the weekend, unknown suspect(s) forced their way into a fenced compound on Grand Avenue East causing about $1000 damage. Once inside, the suspect(s) entered two work trailers and stole two Xplornet satellite dishes and two Xplornet internet routers. Total value of the theft has been estimated at $500. Anyone with information is asked to contact Constable Kieran Crosby at kieranc@chatham-kent.ca or 519-436-6600 extension #87338.

CK20007683 – Around 1:30 a.m. this morning, an unknown suspect forced their way into the WISH Centre triggering the alarm. The suspect was wearing a hooded sweater or coat and was riding a bicycle. Anyone with information is asked to contact Constable Max Bossence at maxb@chatham-kent.ca or 519-436-6600 extension #8746.

Yesterday, our Emergency Communications Centre received 22 hang up calls. We would like to remind everyone that if you accidentally dial 911, please stay on the line.

Should you hang up, the call taker will assume it’s an emergency and dispatch police. 911 hang-up calls consume considerable resources, therefore all cell phone users are asked to lock their phone to prevent accidental calls. 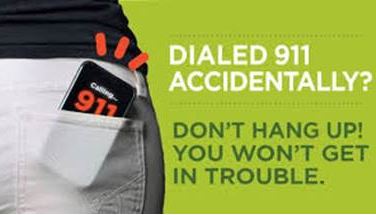