The Chatham-Kent Police Service responded to 147 calls for service in the last 24 hours. Four people were arrested.

Man Charged with Obstruct Police CK20023981 / CK20018924
Last month, police responded to a collision on John Street in Chatham. The driver, a 55-year-old woman collided with a parked car. Through investigation, a roadside test was administered and she was issued a 3-day license suspension.

While police were dealing with the woman, her husband told the officers that she had been diagnosed with COVID-19 by her family physician. Police believe this statement was made in an attempt to alter the investigation.

Both officers were immediately relieved of their duties and on the advice of Public Health were advised to self-isolate until further notice. In addition, a cruiser and two portable radios were taken out of service due to the probability of COVID-19 contamination. The cruiser was cleaned and disinfected prior to being used again on the front line.

Through investigation, police learned that the woman had not tested positive for COVID-19 and the officers were able to return to work seven days later.

Yesterday, the 55-year-old Chatham man was arrested and charged with obstruct police, mischief and fraud under $5000. He was released pending a future court date of August 7, 2020.

Woman Damages Vehicle in Chatham CK20023990
Yesterday morning, police responded to a dealership on Richmond Street in regards to a suspicious woman.

Through investigation, police learned that the woman had damaged a vehicle on the lot by ripping apart the seats and console looking for electrical wiring. The woman was found sleeping in another vehicle. Total damage was estimated at approximately $500.

The 40-year-old woman of no fixed address was arrested and charged with mischief under $5000. She has been held in custody pending a bail hearing.

Man Charged with Mischief in Wallaceburg CK20024012
Yesterday afternoon, the man was observed by a citizen to kick the front glass door of the Wallaceburg Community Centre on James Street, causing it to smash. Total damage was estimated at $800.

Nathan Chauvin, 28 years, of no fixed address was arrested a short distance away and charged with mischief under $5000. He was released pending a future court date of July 29, 2020.

Man Charged with being Intoxicated in a Public Place CK20024108
Around 3:00 a.m. this morning, police responded to the report of a suspicious man lying on the lawn of a residence on Selkirk Street in Chatham.

For his own safety, the intoxicated man was taken into custody as he was unable to care for himself. The 54-year-old Chatham man has been charged with being intoxicated in a public place. He will be released when sober.

Police are hoping to return the watches to their rightful owners. The gold CAW watch has an inscription on the back and dates back to 1998. Anyone with information is asked to contact Constable Derek Shaw at dereks@chatham-kent.ca or 519-436-6600 extension #87110. 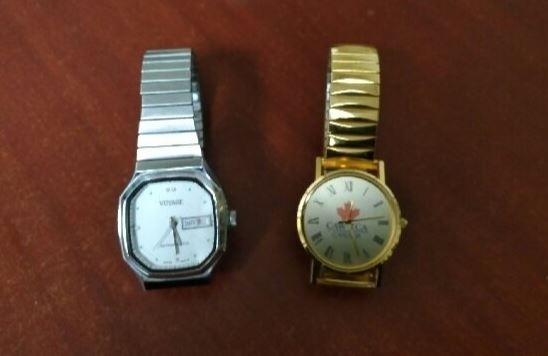