The Chatham-Kent Police Service responded to 226 calls for service in the last 24 hours. Six people were arrested.

Through investigation, police learned that a woman was in possession of a stolen men’s coat. As the officer placed the woman under arrest in the parking lot, she put her purse on the ground. When the officer went to pick up the woman’s purse, her friend grabbed the purse and refused to let the officer have it. This woman was cautioned regarding interfering with an arrest, however she refused to let go of the purse. She was arrested for obstructing police.

Upon being searched incident to arrest, both women were found to be in possession of suspected methamphetamine.

Melissa Boron, 41 years, of Lorne Avenue in Chatham was charged with being in possession of property obtained by a crime under $5000 and drug possession.

Madison Wood, 22 years, of Gray Street in Chatham was charged with obstruct police and possession for the purposes of trafficking.

Both women were released pending a future court date of March 5, 2020.

Update: Recovered Boat in Chatham CK20001993
As previously released on January 13, 2020 police located a suspicious man in possession of an aluminum boat and Honda generator behind 190 Thames Street. Due to the power of social media, the rightful owners were found and the property was returned to them.

Yesterday morning, police arrested Kenneth Shoemaker, 39 years, of Emma Street in Chatham for being in possession of property obtained by a crime over $5000. He was released pending a future court date of March 4, 2020.

Traffic Stop leads to Drug Charges CK20006871
Around 1:30 a.m. this morning, an officer on general patrol initiated a traffic stop on Richmond Street in Chatham.

Through investigation, police learned that the driver was currently suspended from driving. His passenger, was found to be breaching his curfew. As both men were arrested, suspected cocaine was located in the vehicle.

Victor Trigo, 51 years, of Tweedsmuir Avenue in Chatham was charged with driving while under suspension and drug possession.

Virendra Martin, 39 years, of Houston Street in Chatham was charged with failing to comply with his Probation Order and drug possession.

Both men were released pending a future court date of February 27, 2020.

The vehicle was towed from the scene.

Motor Vehicle Collision in Dover Township CK20006740
Just before 8:00 p.m. last night, emergency crews responded to a single motor vehicle collision on Main Street in Mitchell’s Bay. The driver, a 32-year-old woman, lost control of her vehicle, left the roadway and struck a hydro pole. The vehicle came to rest against the front porch of a nearby house. The woman was transported to hospital as a precaution. Total damage was estimated at $6000. She was charged with careless driving.

Citizens Police Academy
Have you ever wondered what it’s like to be a member of the Chatham-Kent Police Service?

Applications are now available for our Citizens Police Academy. Those selected to attend will learn about the daily operations of our Police Service and have the opportunity to participate in a Ride-Along. Classes start in March and will run every Wednesday night for 12 weeks.

The deadline to apply is February 24, 2020. For more information, please see https://ckpolice.com/citizens-police-academy/

Coffee with a Cop
Join us next Wednesday in Thamesville for a free cup of coffee and casual conversation.
All are welcome to attend. 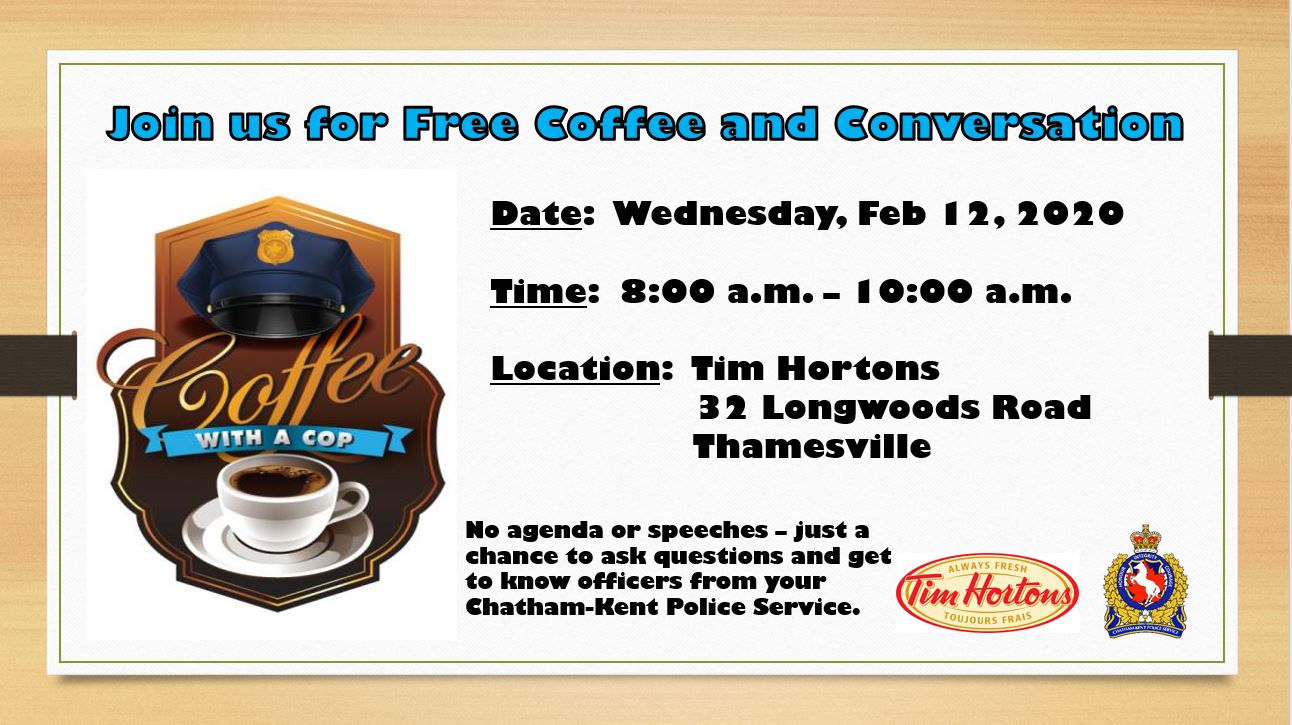