The Chatham-Kent Police Service responded to 199 calls for service in the last 24 hours. Nine people were arrested.

Man Arrested Twice in 24 Hours in Chatham CK19046271 / CK19046445
Yesterday morning around 9:30 a.m. police responded to the report of a suspicious man wondering through backyards in the area of Churchill Street. Officers located the man who was under the influence of drugs. For his own safety, the man was taken into custody and transported to police headquarters. The man was released later in the afternoon when he was able to care for himself.

Just before 1:00 a.m. this morning, the man entered a vehicle and business on Indian Creek Road East. The owner of the business confronted the man, who fled on foot. Officers flooded the area and found the man prowling around homes on Simonton Drive.

Upon being searched incident to arrest, the man was found to be in possession of items stolen from the vehicle.

The 56-year-old man of no fixed address has been charged with break and enter, theft under $5000, being in possession of property obtained by a crime under $5000, trespassing at night and breach of probation. He has been held in custody pending a bail hearing.

Man Charged with Drug Possession CK19046309
Yesterday afternoon, police responded to the report of a suspicious man on Wallace Street in Wallaceburg. Officers located the man and through investigation learned that he was wanted by OPP on an outstanding warrant. Upon being searched incident to arrest, the man was found to be in possession of methamphetamine and hydromorphone.

The 31-year-old Wallaceburg man was charged with two counts of drug possession and released pending a future court date of September 26, 2019. He was turned over to OPP for court purposes.

Man Charged with Theft CK19046303
Around 1:00 p.m. yesterday, police responded to the theft of a bicycle from King Street in Chatham. Through investigation, police obtained physical descriptors of the suspect. Shortly after 4:00 p.m. officers located the man who had returned to the area, still wearing the same clothing.

James LeBlanc, 23 years, of no fixed address, was arrested and charged with theft under $5000 and being in possession of property obtained by a crime under $5000. He was released pending a future court date.

The stolen bicycle was recovered and returned to the owner.

Woman Charged with Breaching her Release Conditions CK19046234
On November 30, 2018 the woman was released from Court with several conditions. Two of those conditions stated that she was to reside at a specific residence in Chatham and to notify police in writing within 24 hours of any change in address.

On Wednesday night, police attended the woman’s residence as part of an on-going investigation. At this time, police learned that the woman was no longer living at this address.

Last night, the woman attended police headquarters to change her address. The 48-year-old woman was arrested and charged with two counts of failing to comply. She has been held in custody pending a bail hearing.

Pair Charged with Failing to Comply CK19046414 / CK19046418
On June 4, 2019 the man was released from Court with several conditions. One of those conditions stated that he was to reside at a specific address in Wallaceburg.

Last night, police attended the address in which both the man and woman were supposed to be residing. Through investigation, police learned that the pair were no longer living there.

A couple hours later, police located the man and woman on Wellington Street in Wallaceburg. The pair were arrested and both charged with failing to comply. The 29-year-old man and 31-year-old woman, both of no fixed address, have been held in custody pending a bail hearing.

Executed Warrants
CK19046342 – Yesterday afternoon, police located a man on Taylor Avenue in Chatham who was wanted by London Police. The 48-year-old man was arrested on the outstanding warrant and turned over to officers from London for court purposes.

CK19046421 – Last night, an officer on general patrol observed a man in Chatham who was wanted for failing to comply with his Probation Order. Charlie Sparks, 57 years, of Charing Cross was arrested and released pending a future court date of September 16, 2019.

A total of 222 vehicles were stopped and checked with no alcohol related infractions observed.

Traffic Enforcement
This week, members of our Traffic Unit focused their attention on school bus safety and distracted driving.

Ten motorists were charged with various offences including speeding, driving while using a cell phone and driver’s license infractions.

We would like to remind motorists that school bus safety initiatives will continue throughout the year in an effort to keep our children going to and from school safe.

Please slow down and use caution around school zones and pedestrian cross walks as we see an increased number of school buses and children back on our roads. 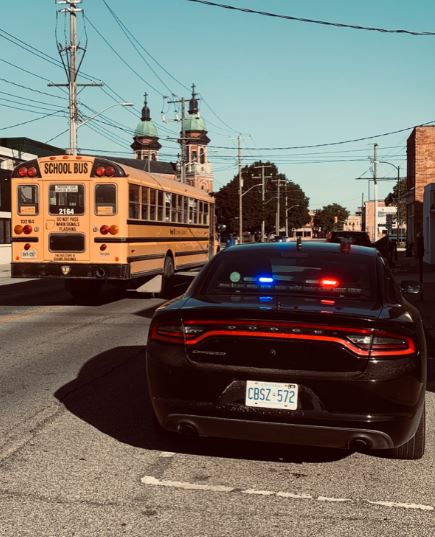