The Chatham-Kent Police Service responded to 169 calls for service in the last 24 hours. Ten people were arrested.

A search of the room resulted in the following being seized:
– 371 grams of crack cocaine valued at $45,000
– 367 grams of fentanyl value at $147,000
– 4.5 grams of psilocybin value of $45
– a large amount of Canadian Currency, digital scales and packaging material
– Stihl chain saw and cement saw stolen from McGrails Farm Equipment over the weekend
– Dyson vacuum stolen from Best Buy earlier this week 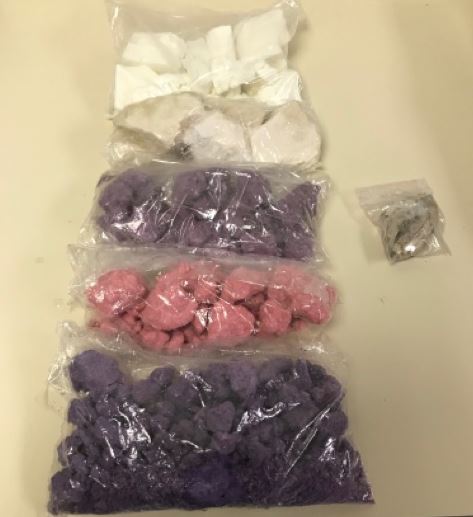 Men Charged with Weapon Related Offences CK20001370
Yesterday afternoon, police responded to an apartment building on Wallace Street in Wallaceburg after a man was observed shooting a handgun outside in a bush area towards a tree.

For public safety, officers contained the area and located the two men involved inside an apartment along with a disassembled 9mm Ruger handgun, extended magazine and ammunition.

Traffic Stop leads to Charges CK20001467
Shortly after 2:00 a.m. this morning, an officer on general patrol observed a car on McNaughton Avenue in Wallaceburg. A query of the license plates revealed that they were not registered for the car and a traffic stop was initiated.

Through investigation, the officer learned that the driver and passenger were both violating their court ordered curfews.

The driver, a 30-year-old Ridgetown man and his passenger, a 30-year-old Bothwell man were both arrested and charged with failing to comply with their release conditions. Both men have been held in custody pending a bail hearing.

Youth Charged with Mischief CK20001371
Yesterday, police responded to a family dispute at a residence in Chatham.

A 16-year-old youth was arrested and charged with mischief after kicking and damaging a door to the home. He has been held in custody pending a bail hearing.

Executed Warrants
CK20001355 – Yesterday morning, police arrested a man wanted in connection with a disturbance that occurred at a residence in Wallaceburg on Christmas day. The 63-year-old Wallaceburg man was charged with mischief under $5000 and two counts of uttering threats. He was released pending a future court date of January 24, 2020.

CK20001399 – Yesterday afternoon, police arrested a man in Chatham wanted by Sarnia Police Service. The 18-year-old man was turned over to officers from Sarnia for court purposes.

CK20001430 – Last night, a man wanted for failing to comply with his Probation Order attended police headquarters and turned himself in. Dale Mason-Delaney, 29 years, of Merritt Avenue in Chatham was arrested and released pending a future court date of January 29, 2020.

Man Charged with Passing Stopped School Bus CK20001227
On Wednesday afternoon, around 3:45 p.m. an officer with the Traffic Unit observed a man pass a stopped school bus with its lights activated on Raleigh Street in Chatham. The officer waited for the students to disembark from the bus and caught up to the vehicle on Patteson Avenue.

Through investigation, the officer learned that the man was also suspended from driving for unpaid fines.

The 25-year-old Chatham man was charged with failing to stop for a school bus and driving while under suspension. He will be required to attend Provincial Offences Court on February 26, 2020.

Anyone with information is asked to contact Constable Dan Clark at danielc@chatham-kent.ca Anonymous callers may call Crime Stoppers at 1-800-222-TIPS (8477) and may be eligible for a cash reward.